How much my indie game made

Why am I writing this?

While developing my first game Cannon Father for the past 8+ months, I became really immersed in the indie game dev community. I found it super interesting to see how much (or how little) indie games made in their lifetime. Part of the reason I published a smaller game like this before creating a full-fledged game was to test the water - how does your average game do financially? Of course I idolized the success stories of other solo devs like David Wehle, Toby Fix, etc. I loved seeing people's success stories and dreamed of gaining financial independence doing something I loved like these guys, like so many of us indie devs do.  However, for every success story there are countless others who "fail" or don't even make it to a minimum wage equivalent. In fact, I've heard a few conflicting statistics, but the most common is that the average Steam game's lifetime earnings are $300! I hope this post will help people set a reasonable expectation for how their first game may perform. So how did Cannon Father do? Did it make a profit?

So I didn't really have a plan or marketing strategy for this game at all. Part of me hoped that word of mouth would spread the game. Or that simply releasing on Steam would drive enough traffic to cover my expenses. Didn't really turn out that way though. I first released Cannon Father here on Itch.io as a for free demo at the end of May. I hoped that this would drive people to wishlist the game on Steam. Didn't really happen - in fact, I only got two downloads in the first two weeks. A vast majority of the 30 or so Steam wishlists in the first week were from Steam itself directing people to my game, with only a couple from outside traffic. I tried making some blog posts and tech demos, even releasing some of the code to help other devs. Again, very little interest. A couple weeks later on June 23, the game released in Early Access on Steam with about 150 wishlists. At the same time, I added the game to itch.io's Bundle for Racial Justice and Equality. It was a great cause of course, and could potentially help me get some feedback on Cannon Father. Pretty quickly, I starting getting hundreds of views on the game's page. I ended up getting over 1000 downloads of the game from itch.io alone! The Steam version, however, gained very little traction, selling only about 30 units in the first two days. With my 40% launch discount and subtracting Steam's 30% cut, the game made about enough for a mid-range dinner. 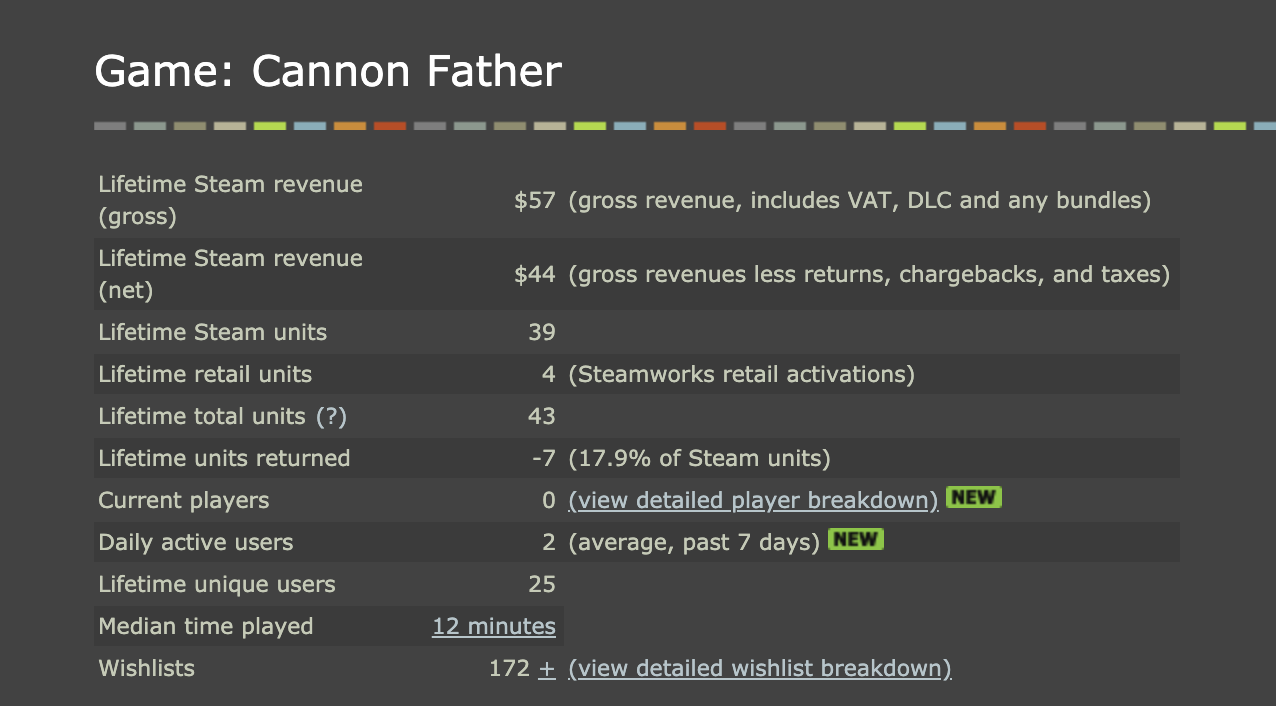 Looking at the numbers alone you could write Cannon Father off as a failure. It lost money, not to mention the countless hours I poured into it. The reception was mild to say the least - just look at the game's rating (3/5 stars). And that's from people who got the game as part of a bundle of 1000+ games for $5! But for me, the journey of creating Cannon Father was incredibly fulfilling and I learned a bunch. I learned procedural animation, wrote my own shader, added psuedo-3d platforming in a 2d engine, and so much more. Will this "failure" stop me from developing games? Absolutely not, and I have even been working on the next version of Cannon Father. And I even have a new multiplayer combat game in the works!

It's every retired-pirate-father's nightmare; a never ending onslaught of enemies, hellbent on destroying your family.

Hmm. The trials and tribulations of making computer games. Marketing is a huge part of it in order to get positive exposure. Though had you spent any money on advertising perhaps you would have just lost even more money? Risky business. Anyways very interesting man, wish you all the best and I will try your game soon. I got in the racial equality bundle.

Thanks for reading! Definitely will be doing much more marketing for the next one, and even for the full release... Be sure to leave a rating after you check it out, it really helps!

nice write up, really gets the point across.